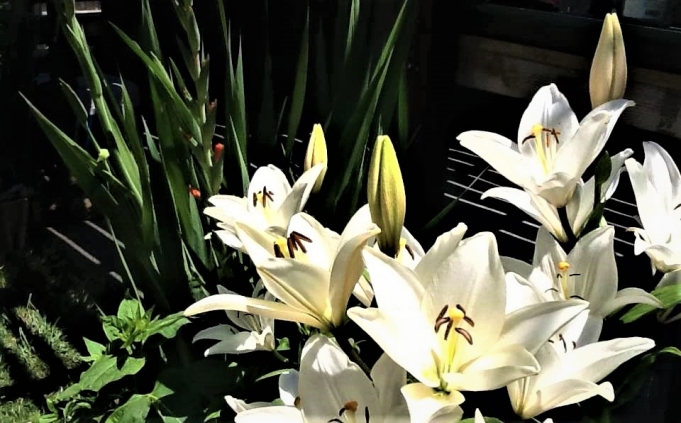 I’ve begun the last couple of months with an interview of the MFA candidate set to teach that month’s Community Enrichment Class. This month, however, I’m teaching the class, and let’s face it, even though April is the fool’s month, it would be pretty silly to interview myself. 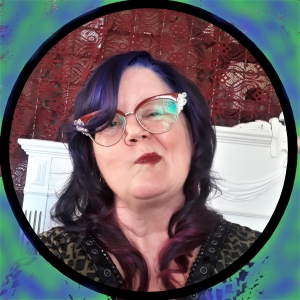 Nah! Too silly even for me!

So, rather than interview myself, I’ll just give you an idea of my background, my literary loves, and what inspired me to create my community enrichment class, entitled Leaving Europe Behind: Writing (Indigenous) Urban Fantasy for the Americas. Info Here

I’m an old broad with a young heart. No really. What keeps me that way is that I’ve wanted to be old since I was, well, young. I grew up in Los Angeles in the 60s and 70s, the daughter of an Anglo dad and an American Indian mother. (I’m enrolled in the Delaware Indian Tribe of Oklahoma, though I also have Wyandotte and Creek forebears.) My father’s family didn’t arrive here from England and Scotland until the last years of the 1880’s. I know, I’m diving in deep here, but my heritage matters when it comes to the class.

Knowing who I was growing up was a whole lot easier on the Anglo side. A lot of Anglo-Saxons, Celts, etc. made their way to these shores. White people from the British Isles were everywhere. The Indian heritage was a bit harder to come to know: my mom always told my brother and I “You are an Indian, and don’t you forget it!” I was proud of being Native, but I never really knew what that meant. Movie Westerns were the closest thing I had as a kid to learning what Indians were like—I didn’t meet another Native that wasn’t part of my extended family until I was in my mid-twenties—but let’s face it, we all know how those movies were at fair representation.

Who Am I? Part II

By the time I was twenty I had begun making a life at the Renaissance Pleasure Faire. I graduated from Fashion School and opened a costuming business, making and selling period garb faire to faire. I also built my booths, utilizing the carpentry skill that I learned from my dad, a professional 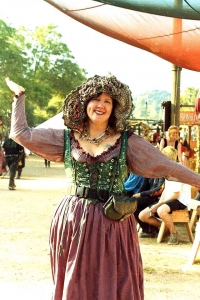 cabinetmaker. Needless to say, I was totally besotted by all things English/Scottish/Irish, from Celtic music, to English Punk, to Faerie Stories, myths, and tales.

That lasted a good thirty years, but eventually I needed a change. The life was hard work, and the economy was getting worse and worse for the self-employed. By chance I began writing again, something I hadn’t done since I started my business. I found my passion once more and decided to go back to school.

I had been reading Native American authors for a couple of decades, since I saw the movie Smoke Signals, written by Sherman Alexie. Being back in college gave me access to American Indian Studies classes. I was finally trying to figure out what “being an Indian” actually meant. I dreamed of teaching San Francisco State’s American Indian Literature class, co-run by the AIS and Creative Writing Programs. (Originally, I’d wanted to take the class but—while it was still in the catalog for both departments—it wasn’t being taught.) I also dreamed (and still do) of teaching Creative Writing and Native Lit. at tribal colleges. I ended up  utilizing Independent Studies classes here at VCFA to earn myself an unofficial minor in American Indian Literature.

Who Am I? Part III

I had a zinger of a realization a year or so ago: I realized that in the first part of my adult & career life I was following my dad’s path. We were both makers, building things, out of wood, and cloth, and various asundry things. It was about the visual, and it was about precision, and we were both very good at what we did. I was also concentrating on my English/Scottish/Irish heritage, through the Faire and all the literature I really, really, really loved. Arthurian Tales to Neil Gaiman, with scads of others in between.

When I began to devote myself to writing, however, I was following my mom’s path: she had been an English teacher, before she moved with her widowed mother and brothers and sister from Oklahoma to California. She had also been a writer, or at least she had wanted to be, but taking care of her mother, being the breadwinner, and then marrying and having kids wiped that dream away. We’re talking the mid-1940s through the 1960s, give or take, so that was pretty typical in those days. It’s too bad, though. From what I’ve read of her work, she was pretty good.

I had also left the Anglo-centric world of the Renaissance Faire and turned my attention to Indian studies, my mom’s heritage.

The idea for this class arose from that zinger. The melding of my two heritages together, to make a NEW cohesive whole. Not only in myself, but also in the words I love to read. When I discovered there were faeries in native literature, I was so excited. I began to study these “little people” as many tribes call them. Then I thought about how I could utilize these beings in urban fantasy, which is one of my favorite sub-genres. “What if American Gods actually had some American gods in it?” I thought. “What if Anansi had been Iktomi?”

I’ve been tinkering with how to make this idea work. It’s a good one, I think, honoring the mythical beings that come from this continent’s soil. Giving them back their place in this land—well, no, not really in the land, they are of it. But perhaps we can give them a place in our hearts. I’m enjoying this so much, and I’ll happily share the fun in class: First, we’ll read work of three of the masters of urban fantasy (de Lint, Gaiman, Jemison) to give students a feel for the genre. Then we’ll look at the legends and folktales of Jo-gah-oh, Puk-Wudjies, Wematagunis, and many more. After that, let the games begin. Literally. We will play prompt & write games and create stories of these beings interacting with our contemporary world. I can’t wait to see how my students interpret what I teach them. It will be a great afternoon! 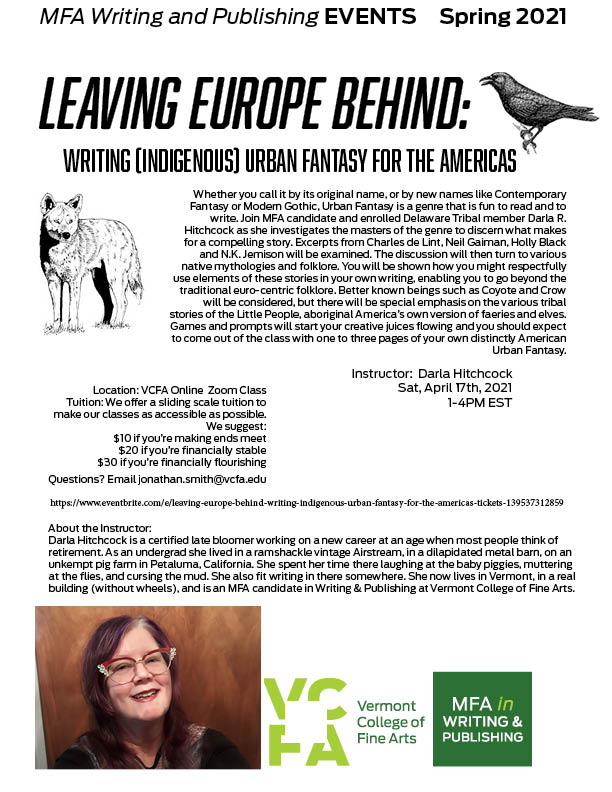