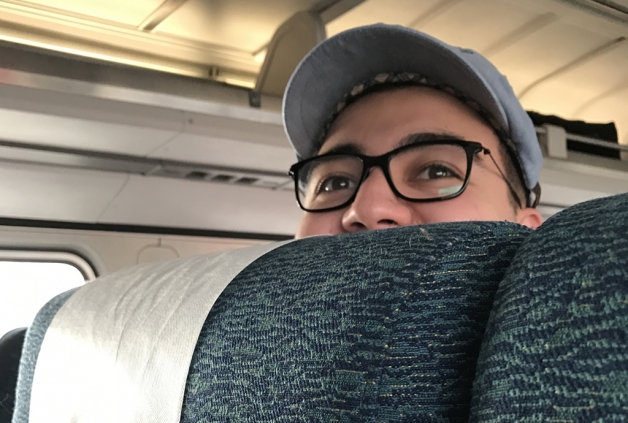 This year, all of us MFA W&P students got to go down to DC and take over a train car, an Air BnB, and eventually a city block-sized convention center. Some highlights include: a panel on women of color’s responses to Emily Dickinson that made me cry, Sam Sax casually walking by while I was in line for a coffee, seeing poet friends from undergrad, and seeing some pretty famous writers completely sloshed. In this spirit, I offer some alternatives for what AWP may stand for:

As a generally anxious and shy human, I was mildly concerned to be sharing a space with this many people. I got over it very quickly, though. It was overwhelming, but in a good way. The book fair alone was worth the trip. There were Lorca-themed T-shirts, free condoms, and VCFA’s Writers are hot fans, courtesy of the brilliant Ann Cardinal.

AWP: All Writers are Pretty

To be honest, the people watching was one of my favorite parts.

Just kidding. Mostly. AWP has been doing better about being more inclusive, and there are minority caucuses (including the Queer Caucus which I’m now a part of) doing important work to make sure that it keeps moving in the right direction.

From vigils in front of the white house to impromptu chanting in the convention center lobby, we certainly didn’t let our time in DC go to waste.

Eileen Myles read her 1992 poem about running for president, as well as a new poem in the form of an acceptance speech.

Dances. Every night. With free alcohol and actual deejays. This may not seem like something important to the AWP experience, but as a genderqueer kid from Tennessee, it was amazing to have that many intoxicated and somewhat rowdy people in one room and not be afraid of any of them. And, as a 24-year-old living in Montpelier, it was amazing to see that club-like scene at all.buy footwear | 【海外近日発売予定】 サウスパーク × アディダス オリジナルス キャンパス 80S “タオリー” (GZ9177) – スニーカーウォーズ

What I’ve Learned About Montpelier, After Being Here for a Total of Three...
Scroll to top