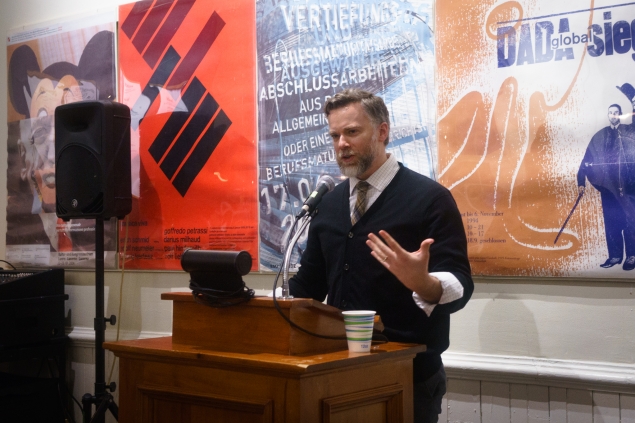 First: James Scott, whose debut novel The Kept is an unyieldingly bleak tale of revenge set in the cold of western New York in the late 1800s. Featuring a mother with a mysterious secret and a boy too young to exact vengeance, Scott told us the story took him eight years to write. 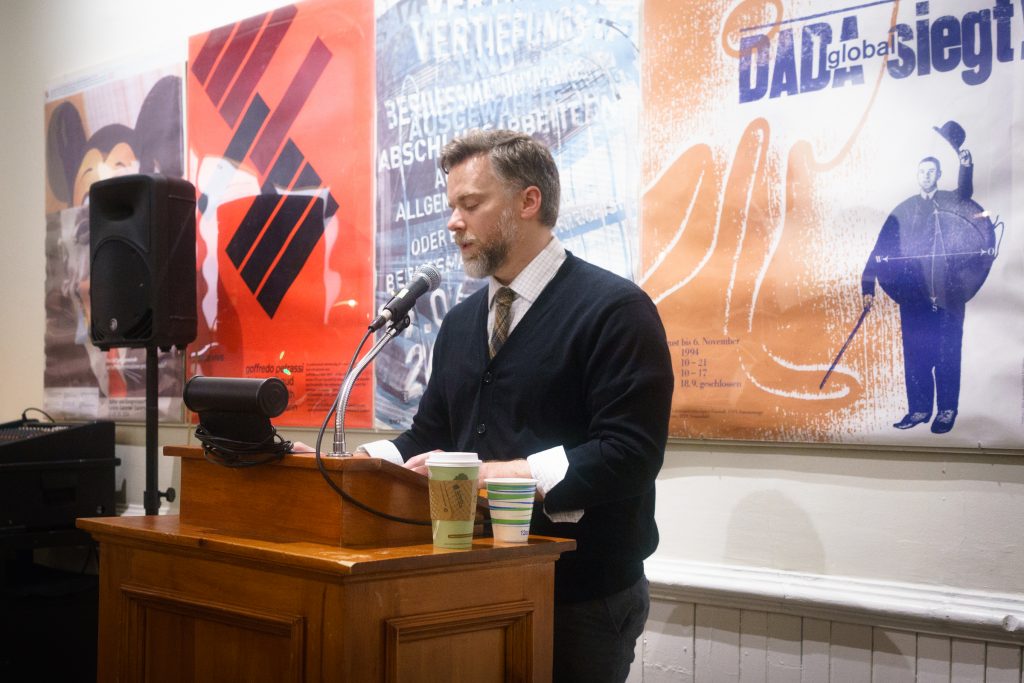 He then read from his second novel, as yet unreleased, which he joked would be less bleak: “This book is just about drowning.” This time, Scott took us to 1990s Burlington, Vermont, a city experiencing gentrification pains familiar to all U.S. cities from that time forward. Here, a volunteer diver for the state police goes into a lake to find a body; on the way up, he meets a mysterious woman—the wife of the man who disappeared. Scott attended nearby Middlebury College for undergrad, so we have reason to trust his intimate familiarity with the Vermont landscape. The story was funny and blessedly awkward, a departure from his late 1800s revenge story, yet both stories captured a great feeling of loss.

Julia Shipley read next. Shipley, Visiting Faculty at VCFA, is also a book reviewer, journalist, and travel writer who lives and works on a farm in Vermont’s Northeast Kingdom. In 2014, her prose and poetry collection Adam’s Mark: Writing from the Ox-House was one of The Boston Globe’s Best Books, while her subsequent book, The Academy of Hay won the Melissa Lanitis Gregory Poetry Prize.

Shipley dove into a pair of essays, about 200 words each, that she wrote for the Old Farmer’s Almanac: the first woman to write calendar essays for the publication in its 226-year history. The essays deal with January and April, respectively. More specifically, she discusses the magic of pulling a shimmering lake trout through thick ice and a lakeside carnival in Danville, Vermont that celebrates when winter finally ends.

Then came a series of poems, her specialty, each with titles like, “The Archaeologists,” “The Porcupine,” and “The Observable Edge of the Universe,” which she called “a very fancy name for a very local poem.” She briefly showed us the paper she was reading from so that we could see each poem took on the form its title reflected: tall and skinny for “The Archaeologists,” short and plump and as spiky as text would allow for “The Porcupine.” 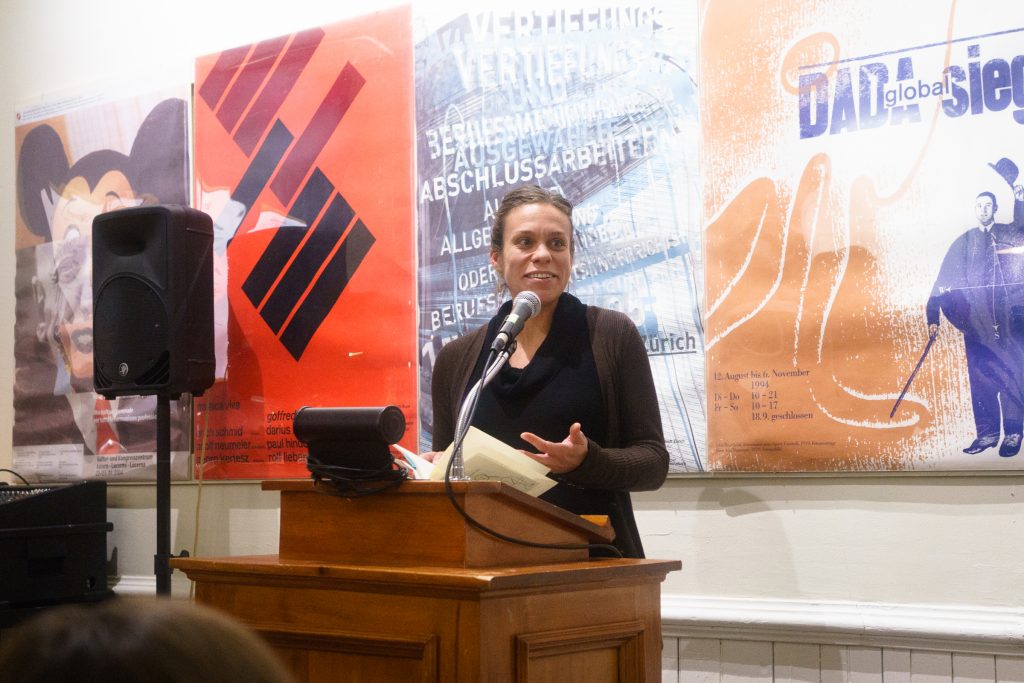 Lastly was Visiting Faculty Jericho Parms. Parms is teaching a course on creative nonfiction this semester called “Mountains and Molehills.” She is the author of  the essay collection, Lost Wax, which The Rumpus called “part meditation, part lyric, part inquiry on topics such as art, love, loss, identity, memory, and coming of age.” The essay, she explained, is not so much an end product of thought but thought itself.  The essay she read that evening, “Practice,” flows between topics: the smallest objects expand to fill the space of an old house.

In this old house, Parms studies paint chips from the hardware store, recites their names out loud to no one in particular, luxuriates over them. Simultaneously, in Milwaukee, Wisconsin, a man steals a Stradivarius violin known as the “Lipinski.” When Jericho reads about the story it reminds her of her own upbringing, practicing violin as a child and learning to appreciate the tone and softness of an old instrument, though—to be fair—hers was not as old and rare as Antonio Stradivari’s creation, last estimated at a cool $6 million. 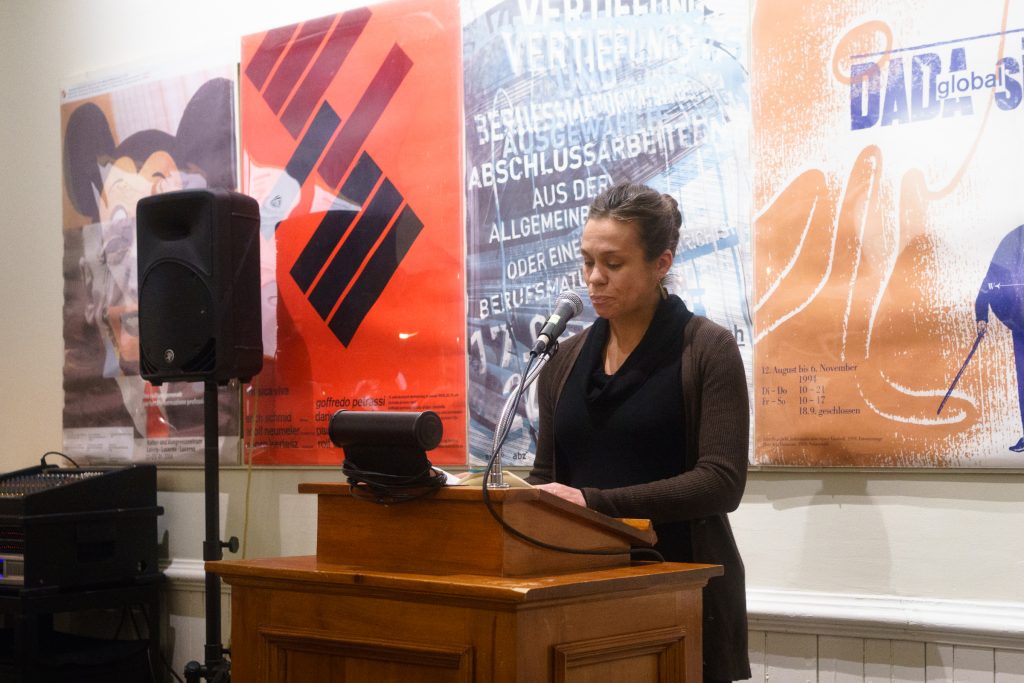 A Visit to May Day Press, Your Friendly Neighborhood Letterpress Studio
Scroll to top