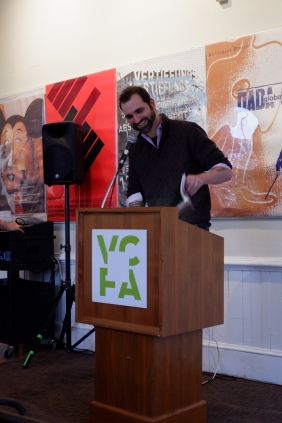 This past Friday, we had the pleasure of hosting two poets for our reading series in Café Anna: Justin Bigos, current faculty member here at VCFA, author of Mad River and chapbook Twenty Thousand Pigeons and co-founder of Waxwing Literary magazine, and Dartmouth poet Matthew Olzmann, author of Mezzanines and Contradictions in the Design.

After mingling with the other attendees over drinks and hors d’oeuvres (pro tip: look out for the double-chocolate cookies—they are positively sinful) introductions began.

“I think I should probably move that to the front for a second edition, maybe,” Bigos responded as he straightened his pages in preparation for his read. “For people like y’all—a new word here in Vermont.” 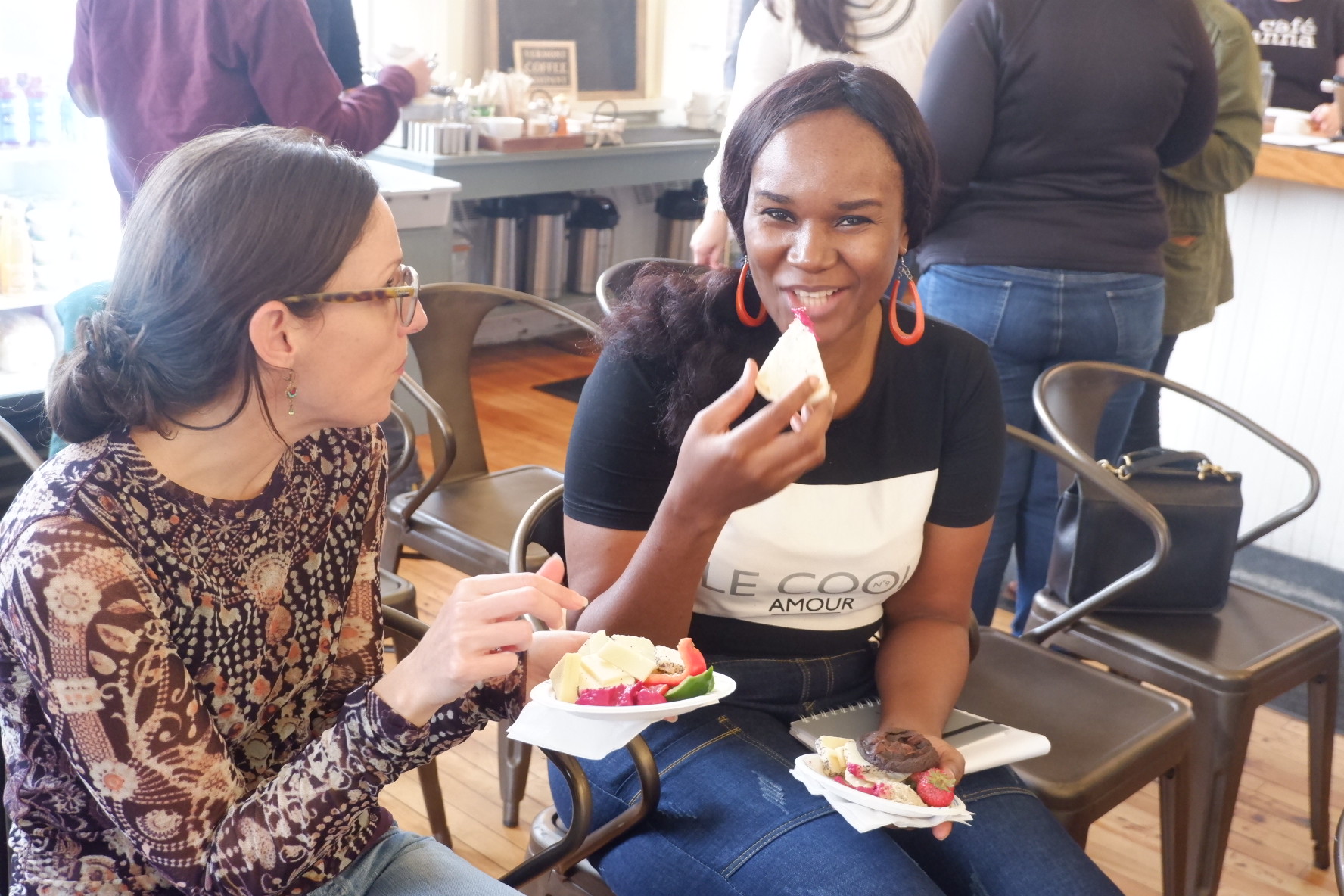 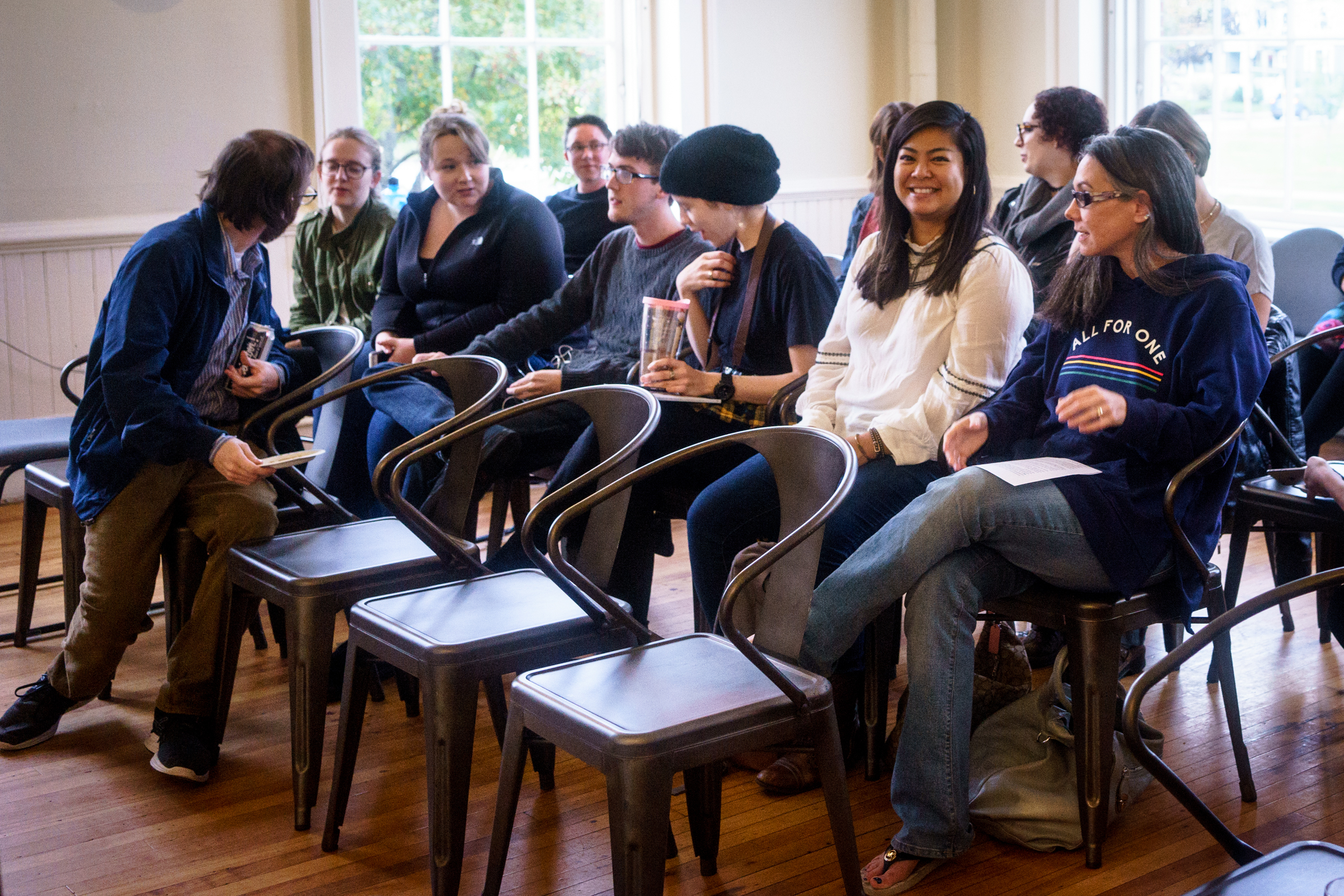 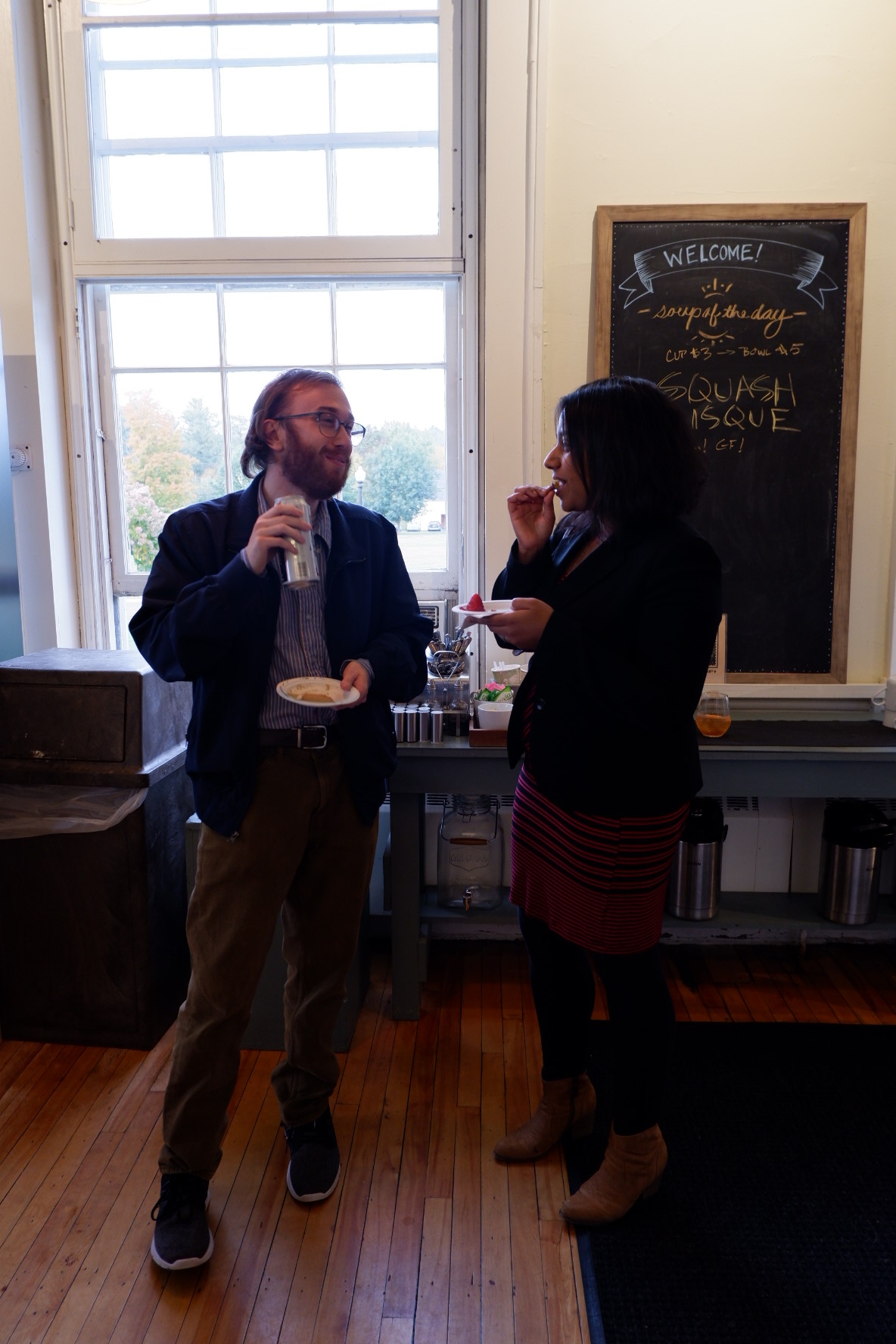 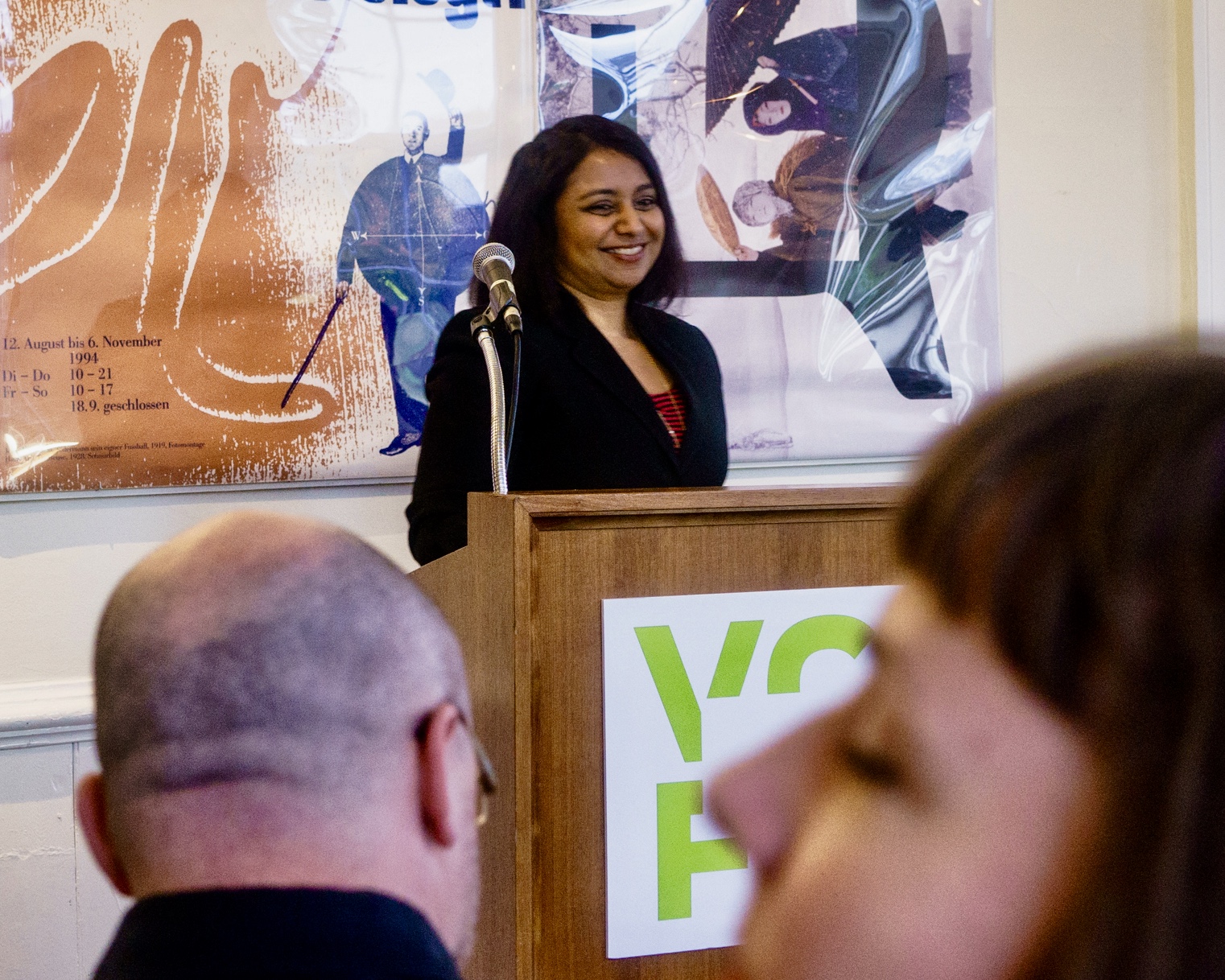 Justin Bigos’ poems are delicious—you can taste them. Not just because he uses a language of food—splitting sardines with his two-and-a-half-year-old daughter, breakfasting on coffee and watermelon, pickling kohlrabi, and musing on kabocha squash and pipián verde, for instance—but also because one is simply encouraged to sit in a moment and consider with him.

His reading primarily came from his current project, a book-length poem with dated sections. “I wanted to do something very different than I had done before, and so I decided to write daily, and to make that something that I went to like work, like labor,” He said in preface. “I also decided I wanted it to be something very multi-voice, very polyphonic.”

In this vein, Bigos dissected moments in time with references to pop culture, bits of then-current events, and above all—music. It’s fitting that Bigos sometimes dipped in and out of a lexicon of song titles and artists, once mentioning a Roy Orbison phase, then The Cramps (“real ghoulish rockabilly business. They took a genre they loved and fucked it in the mouth. I salute them.”) and Wanda Jackson’s “Fujiyama Mama” (“comparing her overpowering passion for a lover to the atomic bombs that killed over 200,000 people in Japan—but she didn’t write the song.”) His words have a musicality of their own. 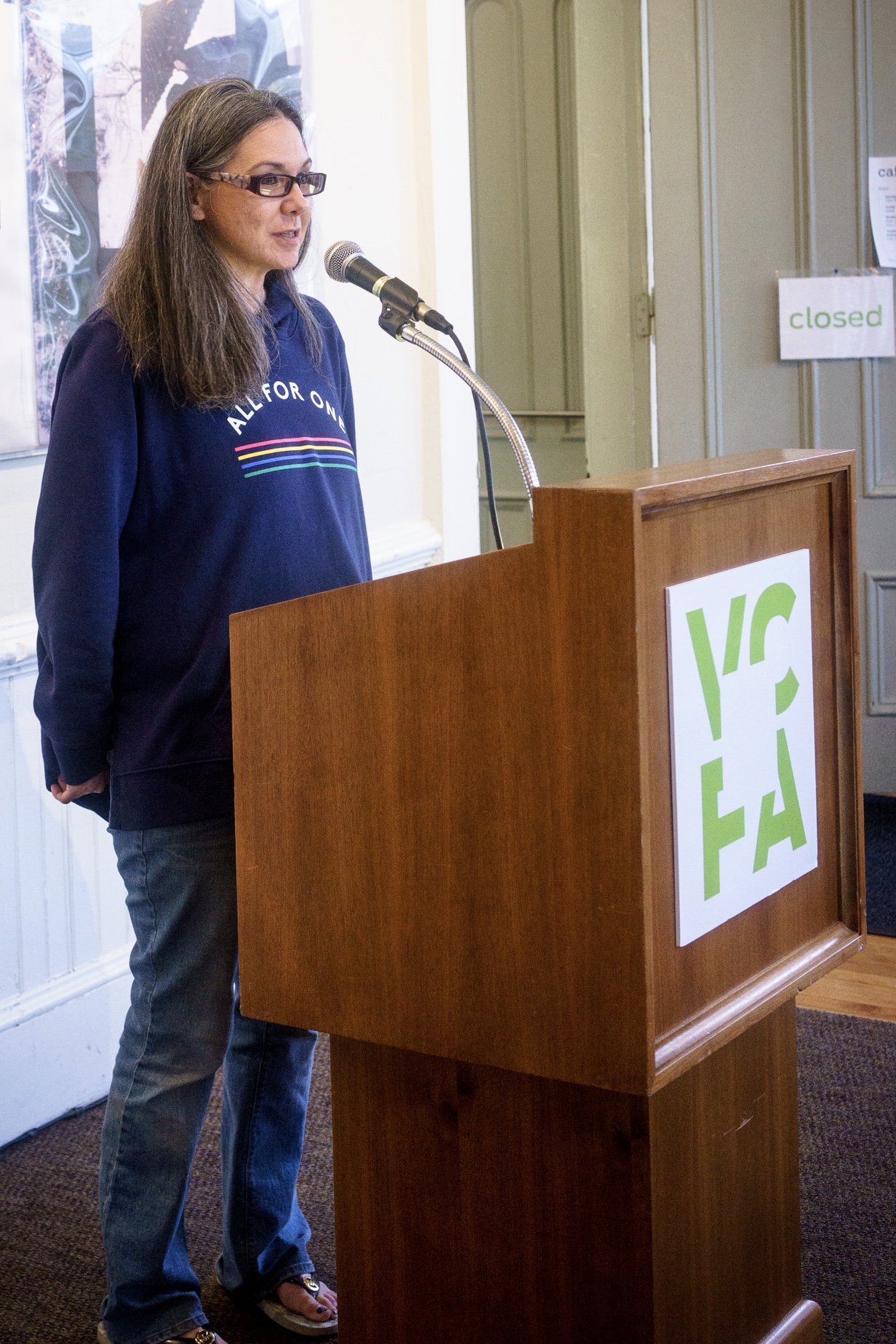 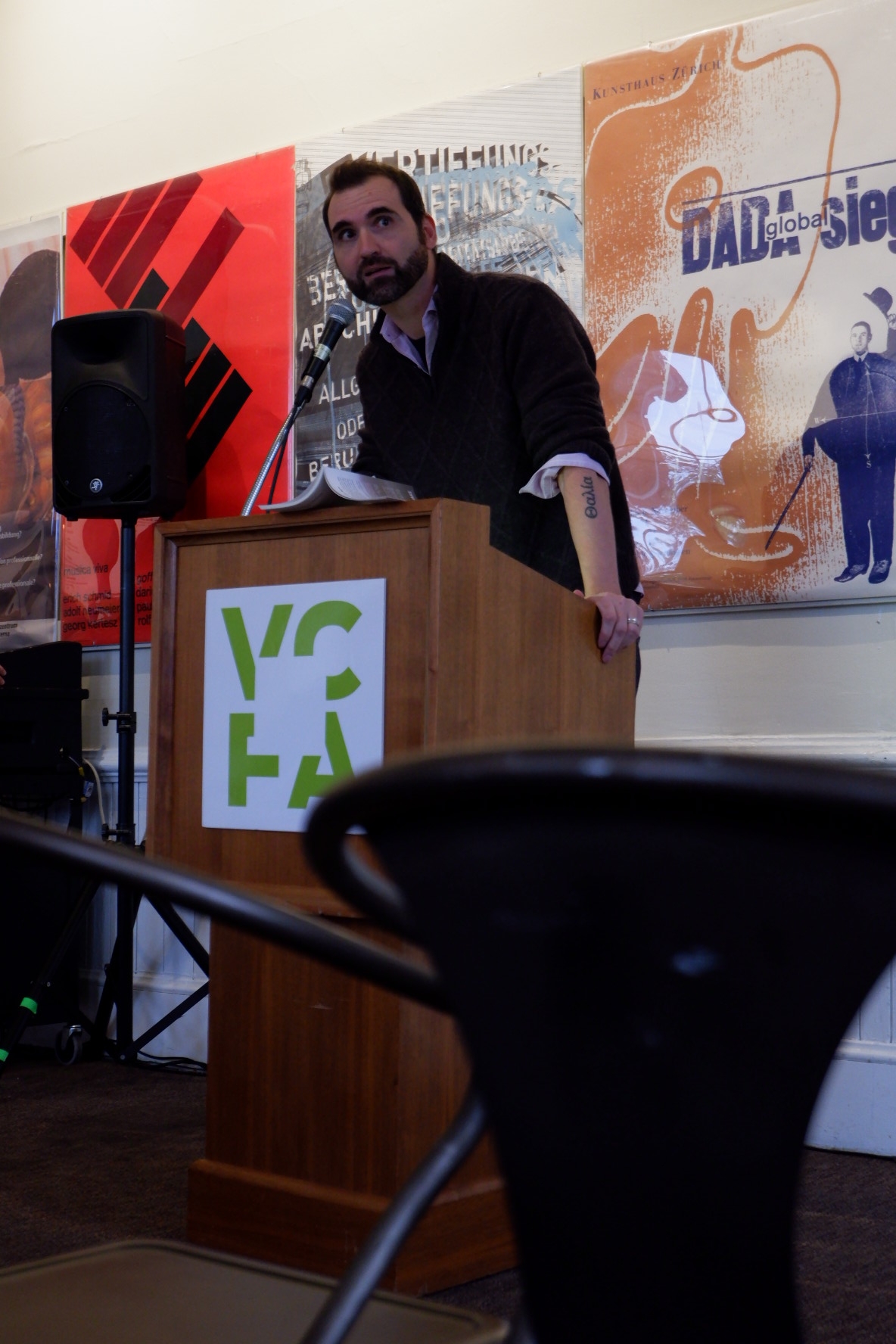 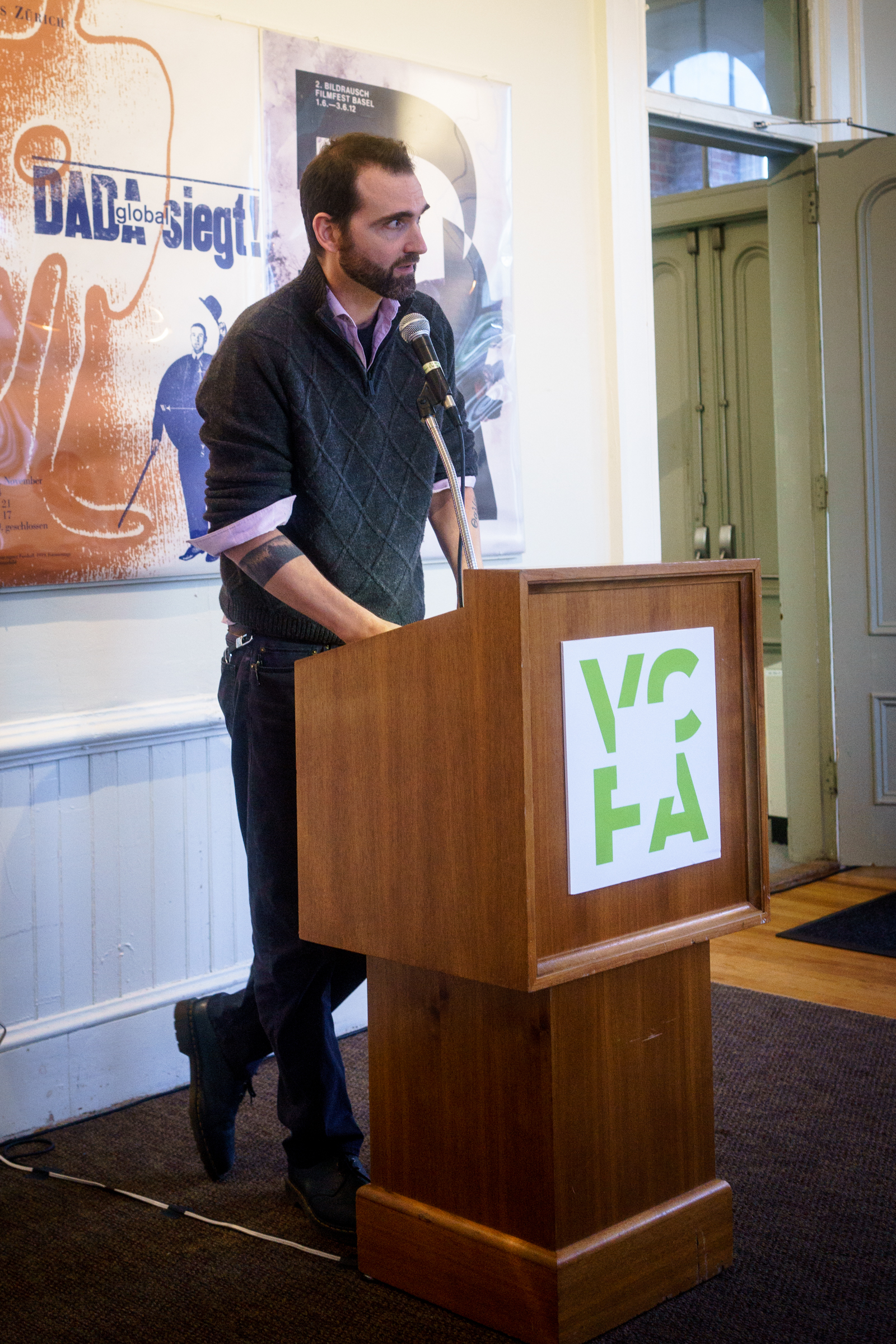 Before our second reader started, we had one of those strange “art imitates life imitates art” moments. Bianca Vinas, ’19, who introduced Matthew Olzmann, began with an anecdote about mistaking another man for him around town.

“In wonderful poetic nature, Matthew,” She began, “I confused you with another human last week.”

She detailed a figure—“tall, gallant, dark-rimmed glasses, a chesterfield top coat”—who she “immediately prescribed…to be poetic,” and who she and a few others watched for hours, knowing that Olzmann would soon be visiting campus. “This is what I gathered: his huge strides in leather booties were poetic, forgetting the code to the front door was also poetic, walking in circles around the coffee machine was poetic.” She finished by describing his disappearance, which she thought “the most poetic gesture of his whole arrival.”

“So now that I know who you are, Matthew,” she finished, letting the audience laugh with her, “I want to thank you […] and promise I will never confuse you again.”

At this point, Matthew Olzmann took the podium.

“This is a poem also about being mistaken for someone else,” he said, not skipping a beat. The first piece delved into questioning identity and spiritual experience, weaving in and out of humor and solemnity at a deft, breakneck pace. He, unlike Bianca, compared himself to the musician Moby (“who, like me, is bald and wears glasses. I am not Moby. I am the man who is mistaken for the man who is mistaken for Moby.”) What followed were a series of hilarious and moving pieces delivered in sharp deadpan.

“If you’re trying to figure out where exactly we are and where exactly this whole thing is going to end,” Olzmann said in transition at one point, “when a cow falls through the roof, we’re probably halfway done, and when I start talking about an invisible horse, it’s probably time to go home.” 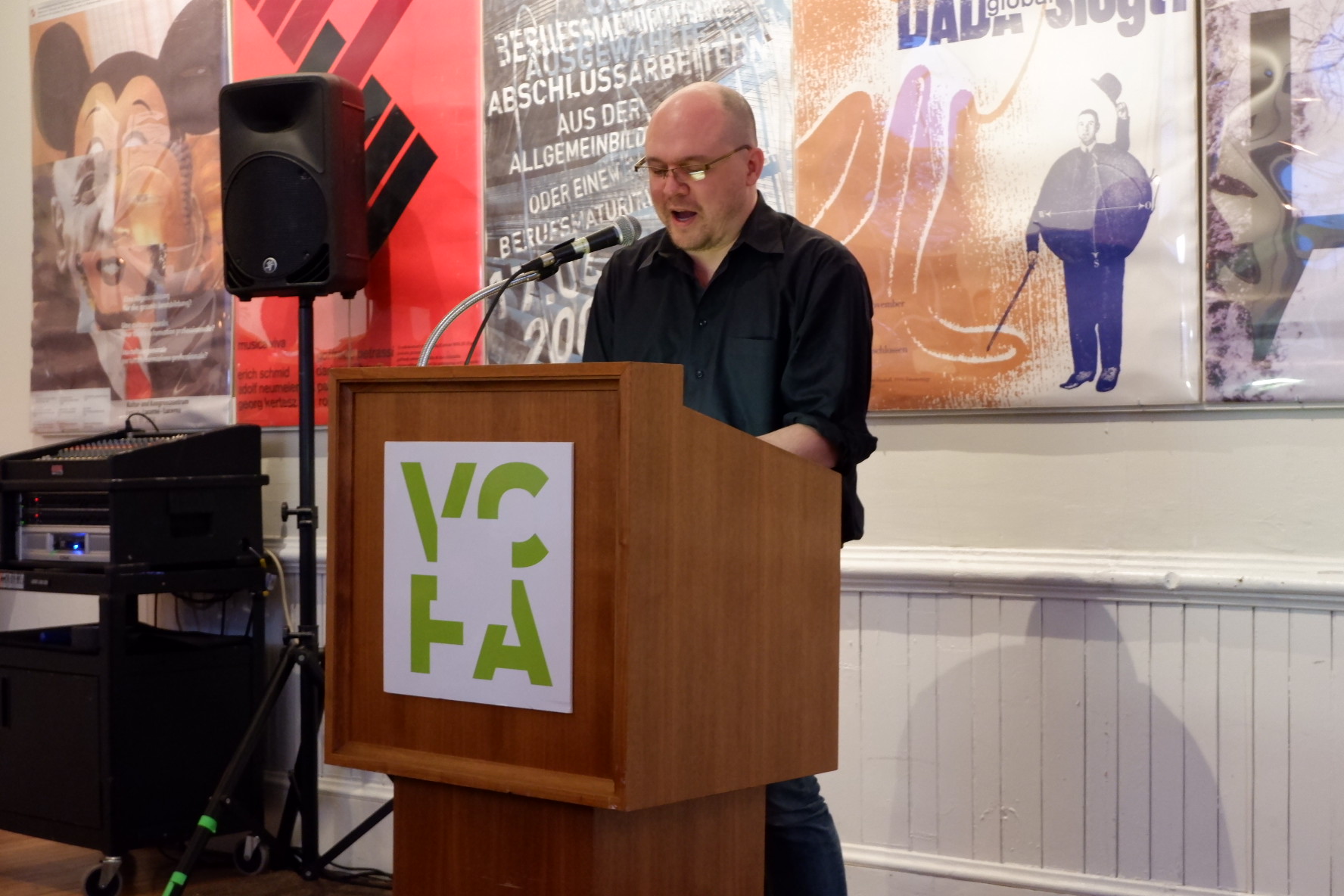 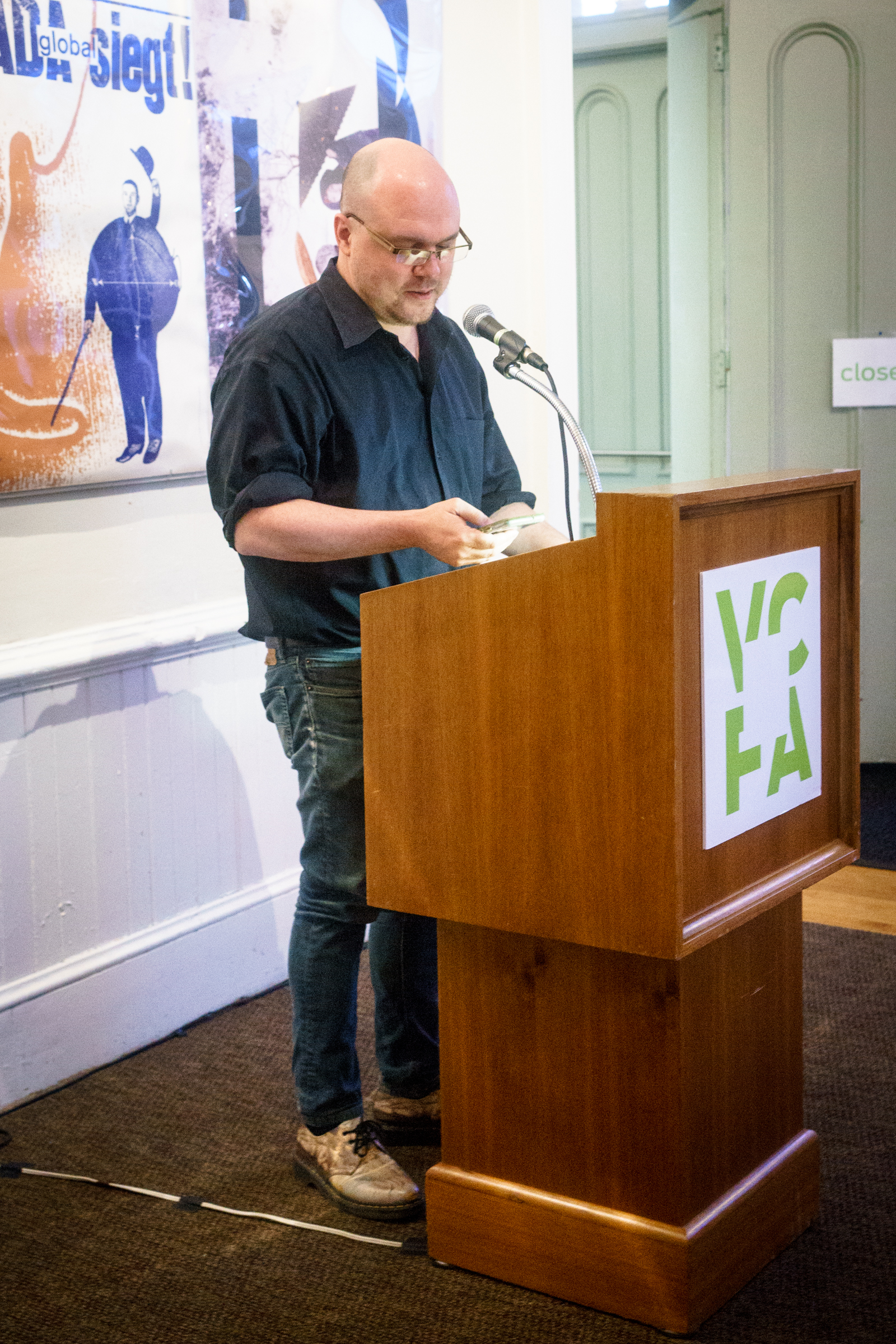 After we broke for the evening, I had so many song titles and artists bouncing around in my head that I could have made my own mixtape—so, essentially, that’s what I’ve done! Should you like to sink deeper into our readings, I’ve curated a playlist of all songs and artists referenced so far, and I hope to keep updating it with new additions whenever possible. So today, we have “Fujiyama Mama,” “Goo Goo Muck” by The Cramps, Roy Orbison’s “Crying,” and “Porcelain” by Moby (not Matthew Olzmann). I’ll keep you posted as time goes on.

Mining Interiority & the “Everybody Test”
Scroll to top