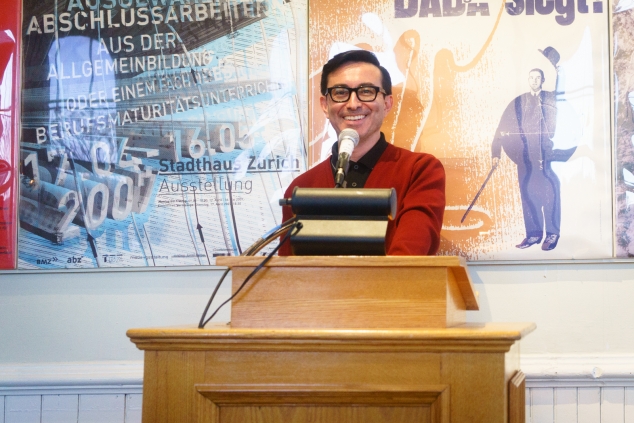 On the right side of his neck, just below his ear, poet and professor Ruben Quesada has a tattoo of the Chinese character 晨, which he tells me means, “early light.” Quesada was born on an early morning in a late summer day in August. “I feel that idea of light embodies who I am and my personality,” he said.

Quesada (MFA, PhD) grew up in the Los Angeles area. His mother emigrated from Costa Rica just before he was born. Next door was a Chinese family that had come from Nicaragua, and their son was just a month older than him.

“From kindergarten to high school we were practically inseparable,” said Quesada. “I was at their house daily. I learned so many things I would have never learned within my own family. I learned about pop culture, about computers, about nature—I would go camping with them, to Sequoia National Park, Yosemite, Joshua Tree. I learned about their culture, their daily way of life. This family took me in.”

When Quesada completed his MFA at the University of California Riverside, he sought a reminder of the past, so he got a tattoo of a Chinese character. “Growing up with that family was something I wanted to hang on to and to be physically a part of me.”

Quesada’s debut collection of poetry, New Extinct Mammal, was published in 2011. He is the translator of Spanish poet Luis Cernuda’s work, Exiled from the Throne of Night. At the Chicago Review of Books, he serves as Contributing Editor; at the UK-based Queen Mob’s Tea House, he is a Senior Editor. He founded the Latino Caucus, which convenes every year at the AWP Conference. Operating at the intersection of Latino and queer literature, he has devoted his energies to amplifying these voices: in his adopted hometown of Chicago, he runs a series of reading events for Latino writers called “Logan’s Run,” named in part by his neighborhood of Logan Square.

On the cusp of debuting his second collection of poetry, Quesada sat down with me at the Vermont College of Fine Arts, where he’s teaching a course on poetry and translation.

Do you still talk to your friend?

Not regularly. After high school, like many people you grow up with, people move, people get married…we lost touch just after graduate school. Almost 30 years after we met.

So he doesn’t know about the tattoo.

But he’d probably be pretty excited.

I think his whole family would be! I think of them often.

Were you able to find a unique identity as a Central American in California, within the Hispanic and predominantly Mexican community?

That’s a good question. In the Los Angeles area there are predominantly Mexican people, and in the city of Bell, there were a few other Central Americans. I remember knowing a handful of El Salvadorian people, maybe one or two from Nicaragua. The unifying factor was language. We understood that our way of life was different. But we all could speak to each other in Spanish.

How did you come to poetry growing up?

My mother encouraged me to read early on—to read widely and broadly. She gave me a book of poems by Pablo Neruda that she had brought with her from Costa Rica. That was my first exposure to poems. But I didn’t really think I could make a life with it.

It wasn’t until I was a teenager—after I’d started writing letters, and I found that writing letters was cathartic. I didn’t understand that that could be a form of poetic expression until almost toward the end, in high school. I was very good at math and science, and I was going to major in physics, but at the very last minute I discovered that if I majored in English, I could still have access to poetry.

Ultimately, I ended up going to a community college and taking classes in poetry writing before transferring to Riverside. It was then that I knew that I could major and focus in poetry, and I learned that I could make a living teaching poetry. 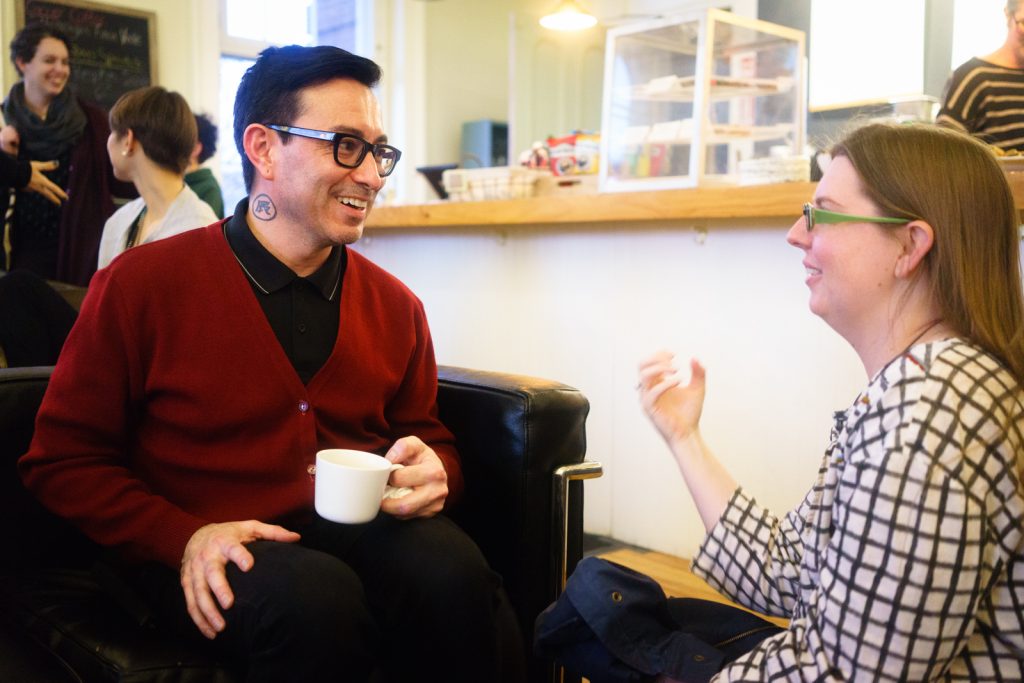 Ruben answers a question after his reading at VCFA.

Even as you graduated, did you have doubts about a life in arts?

I had doubts because I had heard that it was difficult to get a full-time job teaching poetry with just an MFA. Many people that I’d met who had been through a creative writing graduate program ended up teaching part time and having to take on other types of jobs in order to make a living. So it was a really interesting psychological change—but also, the tattoo was a bodily change, right? In many ways it forced my hand into leaving the life where I would be able to present myself in this manner. And I knew that the arts would be one place that would allow me to do that.

But even now, with a PhD, it’s still quite difficult to get a full-time job teaching poetry. Or even literature.

Early on, I doubted whether I could make a living mostly because I didn’t have any models. I didn’t know anyone who did it except for the professors that I had. And none of them looked like me. None of them had the same background that I had. It’s at that point that it became critically important to me that I ensure the visibility and presence of people of color, queer people, in the literary community—in the arts. That is one of my passions: not only to create space, but to feature their work.

Translation must have been inevitable from the study of poetry.

I believe that any time we speak, it’s a form of translation. Any time we’re trying to convey the ideas we have in our own heads, and we put those ideas into language, it’s a form of translation. But what really draws me to poetry is that initial interaction I had with it when my mother gave me that [Neruda] book as a child. While I grew up speaking Spanish and learning to read Spanish, it always felt like something I wanted to share with others in my life who didn’t speak Spanish. I knew the best way to do that is to interpret those words into a language familiar to those I knew.

If you could convey one thing to our translation class you’re teaching this semester, what would it be?

Over time, the concept of translation has changed for me. In recent years, I started putting words to images, to sound. There’s an interesting take on a biblical passage from Genesis that is on my Soundcloud page. I translated Genesis into the sound of gunfire and also into the sound of a harp. Like language, there’s a really interesting performative aspect to translation. I continue to challenge my own notions of translation. Now that I have a chance to teach it, I have a really interesting, challenging thing to do. But my hope is to show others how translation can live in these multiple forms.

I think there’s certainly an academic notion that translation is a lexical exercise where you’re translating something word for word, or sentence to sentence, but what I believe is important is being able to convey an idea or an emotion that might bridge or transgress language or culture.

Tell me about your second collection of poetry.

My first collection is focused on my time in LA, my childhood, and my family. The current manuscript is focused on desire and religion. The book is organized by different Catholic sacraments. There’s a section on communion; there’s a section on confession. What’s different about the way the poems look is that the poems are laid out in blocks of text with no punctuation, so they appear to look as tablets.

The idea for that really came to me when I was preparing for a reading at the Art Institute of Chicago. I was asked to read poems in the Galleries of African Art and Indian Art of the Americas. There was a Mayan stone that was in the shape of a square. The stone itself tells a story in hieroglyphs, which reminded me of contemporary use of images to convey ideas: emojis. I began to think of my use of imagery in a similar fashion.

Does Catholicism still play a large role in your life?

I’m not religious. You might say I’m spiritual, but it played a large role as a child. And it certainly still has influence over me. When I write poetry, I dig deep into who I am and my life experiences, and Catholicism is still within me. It certainly finds its way into the work that I write and into the way that I translate my experiences.

I love it. I’ve been in the Midwest five years, but I’ve lived in Chicago just over two. There are many things I like about it: its public transit system, the skyline, the lake, the weather. The way the city is laid out reminds me of Los Angeles in many ways; the city spreads out into little neighborhoods just the way Los Angeles does. So in many ways it feels like home

How do you write? Do you write at home, in a coffee shop, etc.?

I write anywhere I can at any moment. Revision is a different story. When I revise, most of the time I’ll revise at a desk, at a table. I love revising. I think I do it too much sometimes. You know, I’m reminded of Walt Whitman’s incessant revisions of Leaves of Grass, and I have to remind myself to step away and not labor so much over an idea or a moment in a poem. So I try to step away from something as often as I can.

An Evening With Ruben Quesada