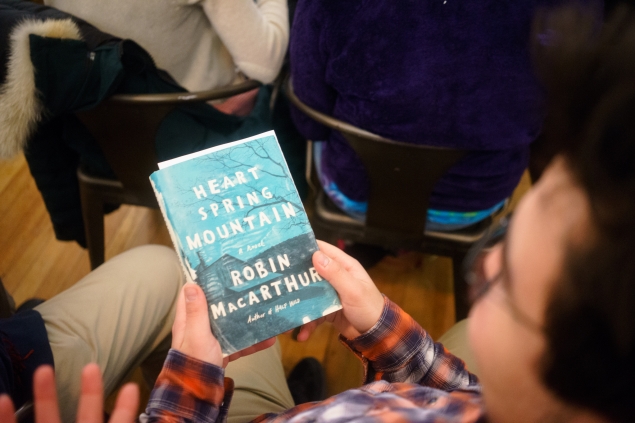 Three of our faculty have either recently introduced books or are releasing them soon. They include a novel about returning home, a heartbreaking memoir of overcoming illness, and a collection of groundbreaking poetry. Why not collect them all?

Robin MacArthur, Visiting Faculty in Fiction, introduced her short story collection, Half Wild, in 2016. In January 2018, she released her first novel: Heart Spring Mountain, from which she read just a few weeks ago.

Published by Ecco, an imprint of HarperCollins, Heart Spring Mountain is themed around the idea of returning home—in this case, to rural Vermont in search of a missing mother possibly swept away in 2011’s Tropical Storm Irene. From this starting point, an entire family tree blooms that encompasses hippie grandmothers, commune dwellers, and part-time strippers. “MacArthur ably sustains multiple narrative threads and voices while sympathetically exploring more than four generations’ worth of hard times,” says Kirkus Reviews, ultimately calling it “a fecund and contemplative feminist family saga.” Oprah’s Book Club deems it one of 4 Books to Read Over a Winter Weekend, calling it “a novel of compassion,” while the Harvard Crimson states that it “beautifully intertwines generational connections.”

Faculty in Fiction and Creative Nonfiction, Porochista Khakpour has an upcoming memoir, Sick, that’s been years in the making. She was diagnosed with Lyme disease in late 2012, but she also endured “all the years of hell where I did not know what was wrong with me,” she said in an interview with Lithub. Addictions, hospitalizations, misdiagnosis, and crushing hospital bills ensued. The resulting work spans two continents and a decade. As publisher HarperPerennial states, Khakpour “meditates on both the physical and psychological impacts of uncertainty…with candor and grace.” Already the book has made it onto dozens of eagerly-anticipated lists, including: Buzzfeed, The Boston Globe, The Rumpus, and Electric Literature—each stating how much their editors look forward to June 5th, the day the book goes on sale.

The cover is unusual, especially from a personal standpoint: in a hospital bed with a tube up her nose, it’s a selfie of Khakpour in the least flattering place to take a selfie. “It’s a lot to imagine your face at book stores and all over the internet for ages to come, but especially your face associated with a word like ‘sick!’”Khakpour said. “Then it seemed to make sense to me, when I remembered how many selfies—before they were called ‘selfies!’—I had taken during my sickest years. There was often not much more to do.”

Lastly: Poetry Faculty member Matthew Dickman debuted his fourth collection earlier this month. In Wonderland, Dickman reflects upon the neighborhood in southeastern Portland, Oregon, where he grew up. In a Portland before Portlandia, he endures a childhood filled with: “ambient violence, well-intentioned but warped family relations, [and] confining definitions of identity.” Dickman introduces a series marked by the hour, beginning at 1am and going on to midnight the next day. The “deprivation of this particular Portland neighborhood in the 1980s,” according to publisher W.W. Norton, reflects the changing face of a city beset by the forces of gentrification. Fittingly, Portlandia star Carrie Brownstein gave it kudos, calling the collection “deft and sparkling.”

Dickman’s youth is marked by booze, addiction, skinheads and punk shows. There are plenty of stories to tell here, but for him, poetry is something more than a straightforward narrative: “poetry doesn’t come from storytelling,” he said in an interview with Hunger Mountain. “It comes from prayer. I think there’s something in our DNA as human beings that feels there’s something sacred about poems.”