As we wind down the semester, we come to our final Community Enrichment Class. “Magic And Tech: Elements of Science Fiction and Fantasy”  taught by MFA candidates Molly (MK) Martin and Dexter Loken. I interviewed the two of them recently and wow, was it fun. I’m glad I recorded our Zoom meeting, though. With the two of them “riffing off each other” at lightning speed, there was no way I was going to get it all down in my notebook, much less decipher my chicken scratch after the fact. I will make a valiant attempt, however, to tell you who they are and what they will teach.

Let me start by introducing them. 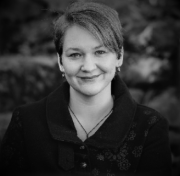 Molly was born and raised in Minnesota, but the world travel bug hit her early: she spent a year of high school as an exchange student in Paraguay. As an adult she joined the Army and was deployed in Afghanistan and Iraq, which led to a government job stateside. She lived in Eugene, Oregon for a bit, where she got a degree in Linguistics from U of O.

She and her family moved to North Carolina, and then, through a state program to lure remote workers to this state, ended up here in Vermont. One thing about living in Vermont, though: she missed her writer friends. They had been plentiful in Eugene. In looking to find fellow scrivener souls she stumbled across VCFA and realized that the Writing & Publishing program would be a perfect fit. We are lucky to have her! (You can read more about Molly, including her publications, on the poster at the bottom of the page.) 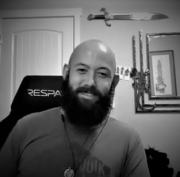 Dex is a California boy with nomadic genes. He served in the Peace Corps in Tanzania and has traveled extensively, so far visiting and/or living in 23 countries. The certificate in publishing drew him to VCFA. He then decided to stay for the long haul and get his MFA. As far as writing goes, he finds himself writing short form Creative Non-Fiction, but his true calling is long form Speculative Fiction. He says—and this is true of Molly as well—that his ideas are simply too big for short stories.

He’s been “stuck” in California since Covid started, but at least he has his black lab mix to keep him company!

This class is about the nuts and bolts of writing speculative fiction. It is a how-to class for the writing of magic and science.

There’s a lot more telling in speculative fiction, because, as Dexter says, it needs it. You’re building an entire world, unlike, say, most literary fiction which takes place in a world very much like our own. But, on the other hand, you don’t want to give too much exposition. You don’t want the dreaded info-dump. So how do you write a world that is convincing without too much telling? According to these two fine writers you have to know the backstory of your world. You have to know what makes your world tick.

In other words, if gravity doesn’t exist in your world on page twenty-three, or time moves differently on page fifty-five, then gravity and time must behave the same on page three-hundred-and-two. Otherwise, according to Molly—and I concur—you’ll “piss-off your readers.”

The two will also go into some of the misconceptions about speculative fiction.  Molly brought up the idea that speculative fiction is formulaic. She says (and do I even have to tell you that I concur?) that what some see as formulas are actually scaffolding upon which a good story is built. Rather than constrain a story, it supports the story. It allows it to be bigger—and better—than it could’ve been otherwise.

So, go to this, our last community enrichment class. You’re sure to have a blast, and your writing will improve as well! Tickets and information here. 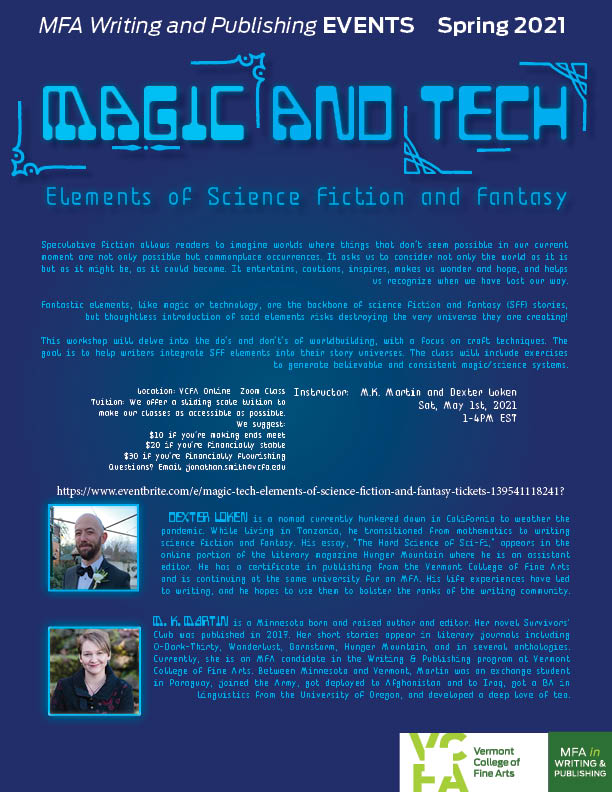 A Review of Doubting Thomas
Scroll to top