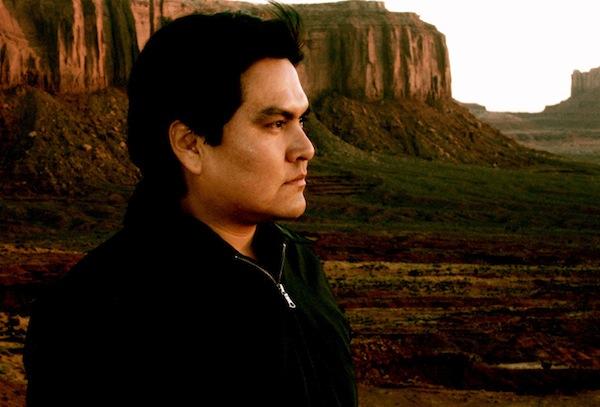 Sherwin Bitsui’s Flood Song, the poet’s second book, is a hike through the desert at sunset when you don’t know where you’re going. It is equal parts disorienting, beautiful, and full of misdirection: surreal and bordering on the nonsensical, but with enough glimmers of the familiar to bring you back. You follow Bitsui to “a cornfield at the bottom of a sandstone canyon,” into the past, “a blurry splotch of red crosshatched with neon light,” while “black ants drift through the throats of wounded stags.”

Bitsui was born in Fort Defiance, Arizona, on the Navajo Reservation, a member of the Todich’ii’nii (Bitter Water Clan), born for the Tl’izilani (Many Goats Clan). He came into poetry at the tail end of his teenage years, when he started college at the Institute of American Indian Arts—surrounded by fellow tribal members, an experience which he called “cathartic.” In 2003, his first book Shapeshift was published, followed by Flood Song six years later. Along the way he’s racked up awards, grants, and fellowships.

This Friday, Bitsui will be reading at VCFA’s Writing and Publishing program, reading alongside faculty member Trinie Dalton. He’ll also be making time to discuss his work with students, before and after the reading. We’re looking forward to welcoming him here, a poet who evokes so much surreal imagery, blending into one another, a kinetic force from line to line. If we can

In an interview with Guernica Magazine, Bitsui said: “I feel like I’m a border poet in some ways. I definitely experience several worlds as one… Poetry, structurally, felt similar to the way I thought and the way I perceived the world as a Navajo person. It spoke to me on a very human level where walls cleared away to shared breath and sky.”